Marrying Prince Charming is every young girls dream, but marrying an actual Prince only happens to a lucky few.

Are you a royal wedding fanatic? Or just a curious observer intrigued by English royalty? Regardless, we think it's safe to say that (almost) everyone in the world has some wedding fever over the upcoming nuptials of Prince Harry and Meghan Markle.

On May 19, 2018, American actress Meghan Markle will marry the remaining unwedded Prince Windsor in what can only be imagined as a tasteful and opulent affair at St. George’s Chapel in Windsor Castle. With two receptions planned within Windsor Castle at St. George’s Hall, and another hosted by Prince Charles at Frogmore House, the wedding is no doubt, THE wedding of the year.

The venue, the dress, the flowers, the food, every detail has been painstakingly researched, speculated and analyzed. We’re here tell you what to expect when you tune in bright and early in two short weeks!

The newly betrothed couple announced their engagement to the world in the Sunken Garden at Kensington Palace. Meghan appeared in a beautifully appropriate white coat by Line the Label and freshly adorning her finger was a custom designed three-setting diamond engagement ring designed by the Prince himself. The couple looked smitten and charmingly delighted at the imminence of their May 2018 nuptials. Obviously apparent was their affection as they embraced and held hands openly, which is commonly known to be against royal etiquette. This is just an early sign of the couple straying away from tradition. 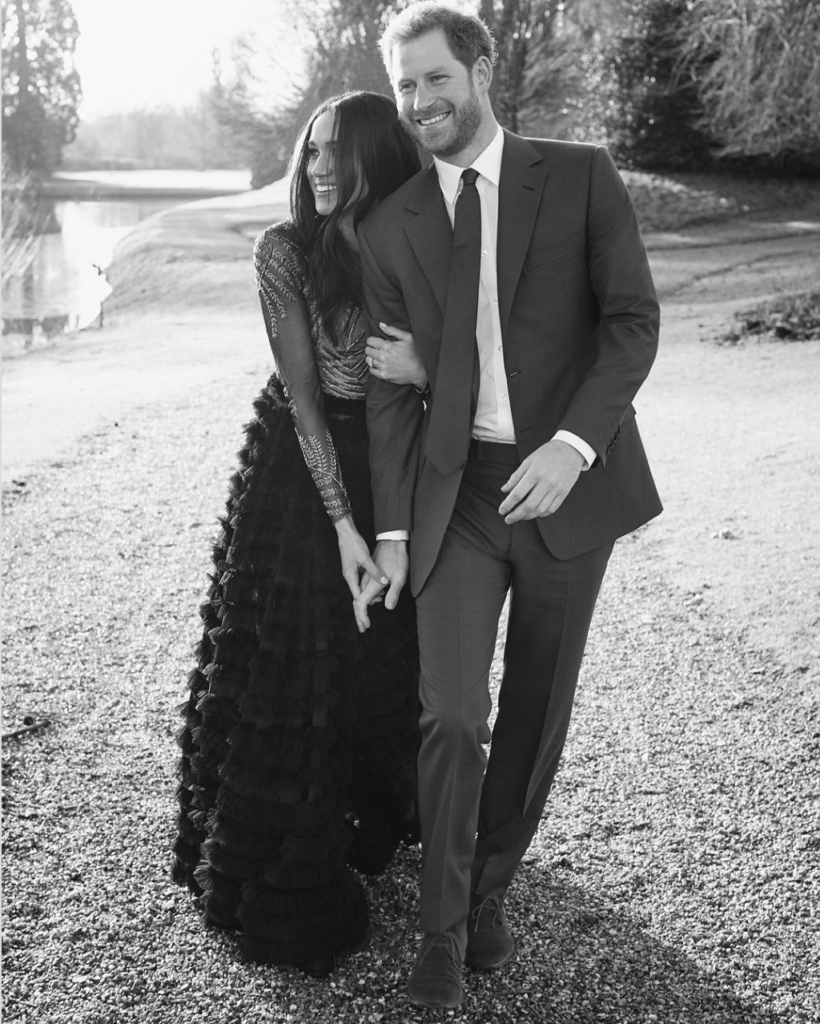 Featuring a gold band, a large centre cushion diamond from Botswana flanked by two smaller outer diamonds from the personal collection of Harry’s late mother, Diana, Princess of Wales, the stunning engagement ring was made by Cleave & Company, Court Jewellers and Medallists to Her Majesty The Queen. Botswana carries a special significance for the couple, who have spent time together there when they began dating in 2016. We think it’s safe to say that Prince Harry did very good. 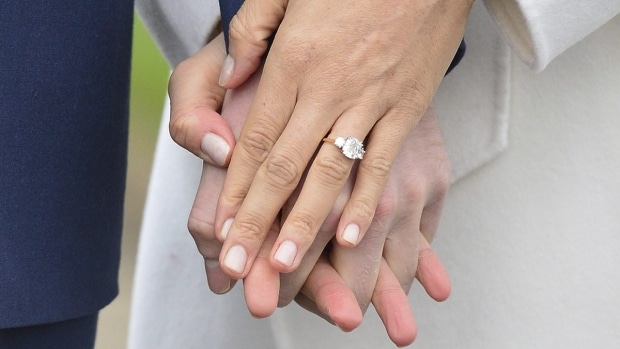 The wedding bands will be made of the same Clogau-Welsh gold as Princess Diana and Kate Middleton’s wedding rings, and Prince Harry will be rocking a wedding band just like his dad (but unlike his brother Prince William).

St. George’s Chapel will be the romantic setting of the royal ceremony. Fitting 800 guests (compared to Westminster Abbey’s 1,000), the wedding is set to have a more intimate feel with allegedly only 600 lucky attendees being invited. The union of Prince Charles and Camilla Parker Bowles took place at this very spot back in 2005, and the chapel is set to be the venue for the upcoming wedding of Princess Eugenie in October of this year. (Image below found here.) 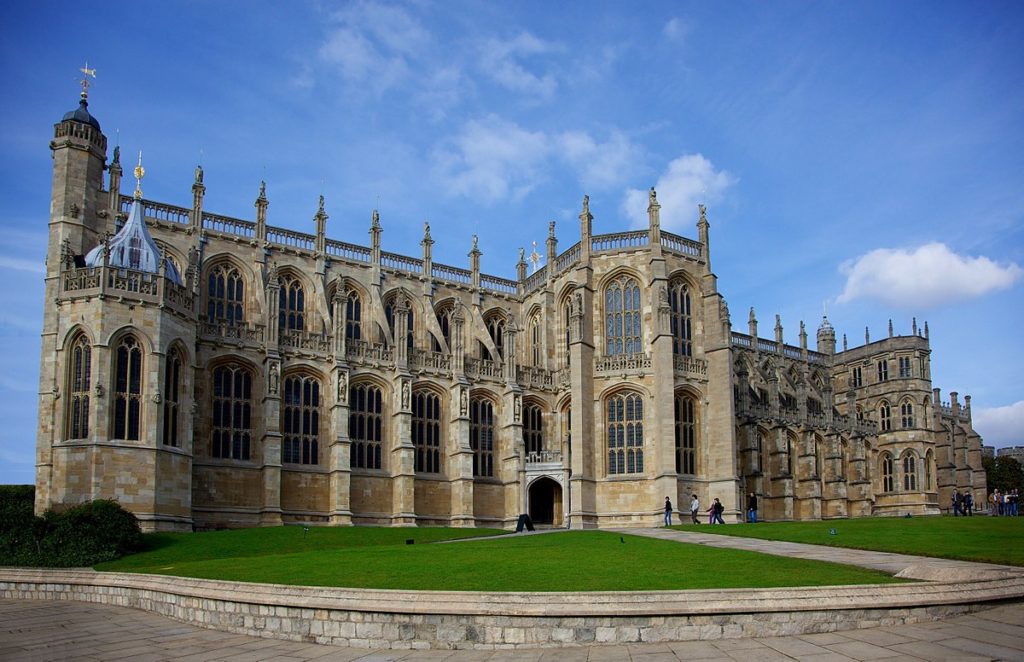 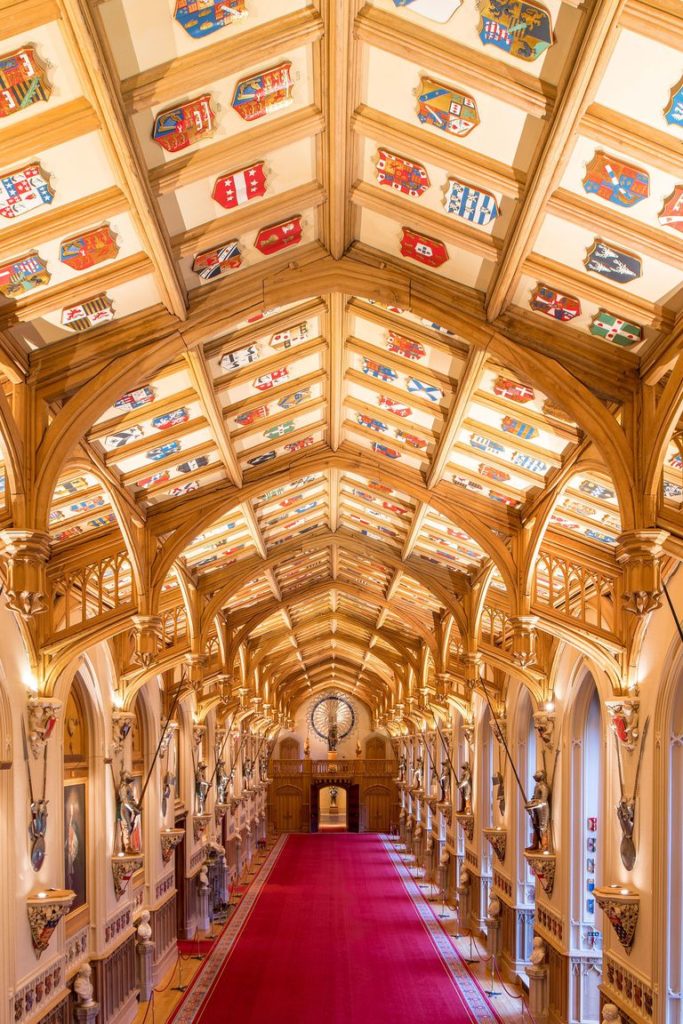 The first reception will take place at St. George’s Hall, featuring a striking modern gothic interior. The venue of the second more intimate reception will be Frogmore House, which was the setting for the couples’ dreamy engagement session.

The couple has chosen Alexi Lubomirski to photograph the wedding following the ceremony at St. George’s Chapel. He is the same photographer who captured their beautiful engagement at Frogmore House last year. He is also prince himself of the Polish House of Lubomirski!

Set to perform during the ceremony is Sheku Kanneh-Mason, a 19-year-old cellist who won BBC Young Musicians contest in 2016. He will be joined by the southeast England-based Christian gospel band Karen Gibson and the Kingdom Choir. The big day will also feature the Choir of St George’s Chapel, and all music will be led by James Vivian, Director of Music at St George’s Chapel.

Ed Sheeran is rumoured to be performing for the royal couples first dance and for the reception, the Spice Girls are set to perform a comeback. We couldn’t think of a more suitable first dance song than a live version of “Perfect” or the best dance party songs that epitomize the 90s.

The florist has been confirmed as Philippa Craddock, who will use locally sourced foliage from the gardens and parklands of The Crown Estate to create the displays at the Chapel. May flowers are said to be in abundance, including our favourites: peonies and roses. Reports say branches of beech, birch and hornbeam, along with white garden roses, peonies and foxgloves will be used.
Of course, Meghans bridal bouquet will include one sprig of myrtle (a tradition dating back to 1840) which symbolizes hope and love.

We predict a white colour palette with touches of peach and statement greenery.

In typical royal wedding fashion, very little has been revealed about the bride’s gown. Will Meghan be dressed in traditional lace, like her future sister in-law? Or will she pay homage to her late mother in-law and choose a silk taffeta ballgown? When it comes to designers, hints have been dropped for Alexander McQueen, Inbal Dror, Ralph & Russo, Christopher Bailey of Burberry and Rouland Mouret. The predictions have been that the later French born designer will be crafting the dress, and if this is the case, we should prepare to see a simple yet structural silhouette with smoothing fabrics and potentially some statuesque folds that so epitomizes his brand.
It is rumoured that Meghan will wear two dresses: the church ceremony dress will be the classic, traditional and conservative number while the reception gown may be her chance to show some skin. We definitely predict beading, a low cut back and slim silhouette in the mix!
It was recently reported that Ralph & Russo will be designing one of the two dresses, and we couldn’t be more thrilled. See their latest Couture Collections here and here.

Kensington Palace confirmed that Harry will see Meghan in her wedding dress for the first time when she walks down the aisle accompanied by her father. We are a sucker for traditions!

Here are some of our favourite predictions brought by the industry’s finest designers: 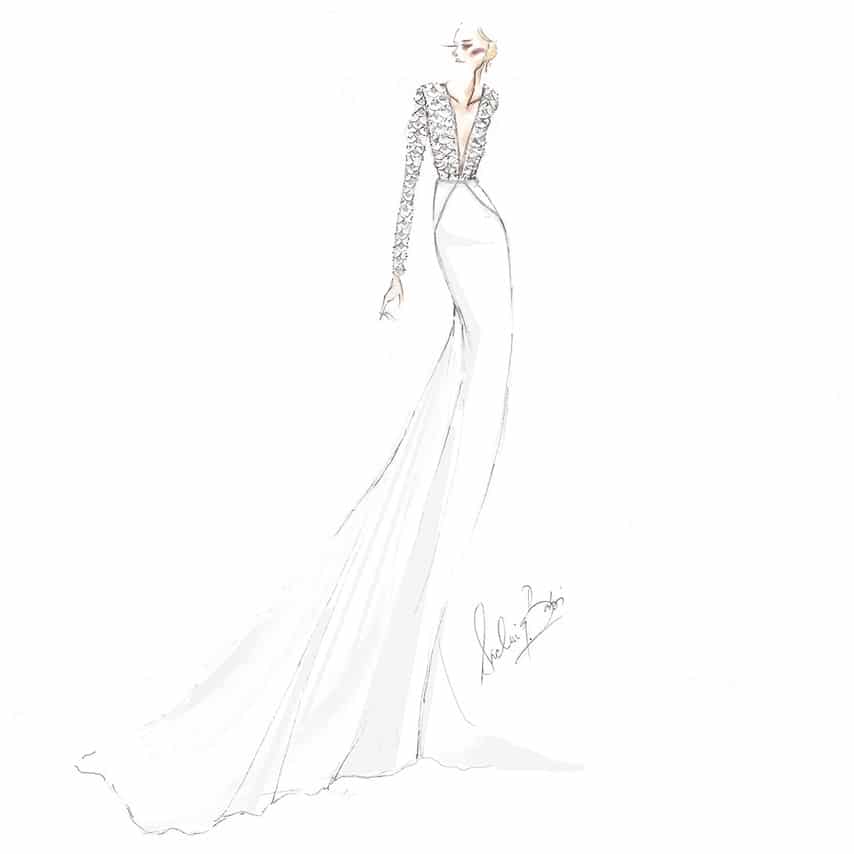 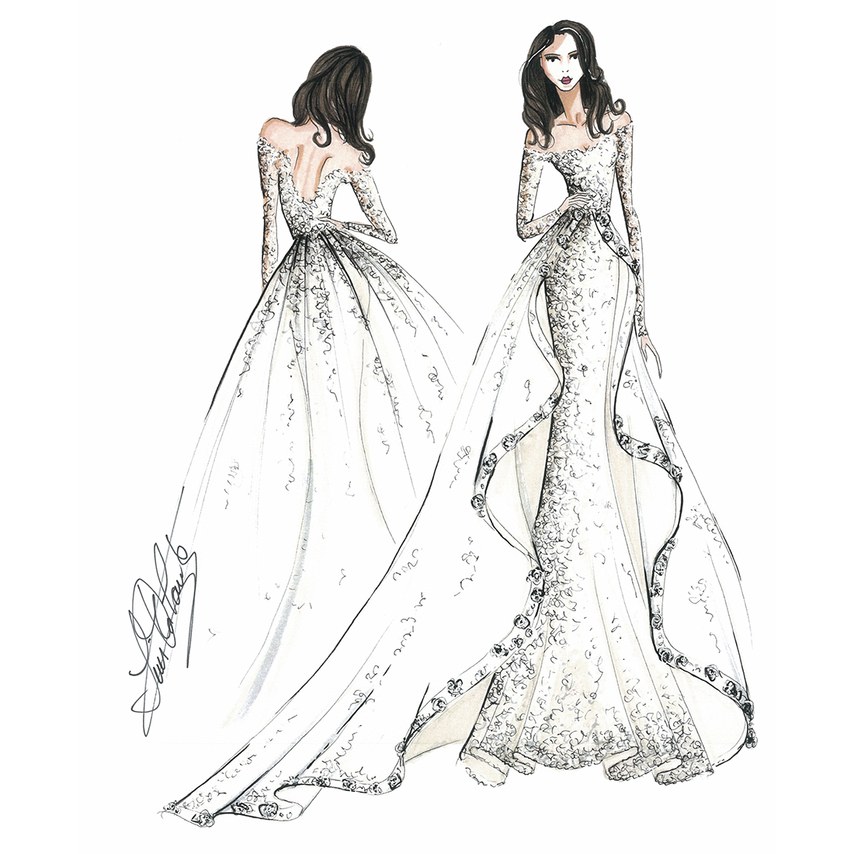 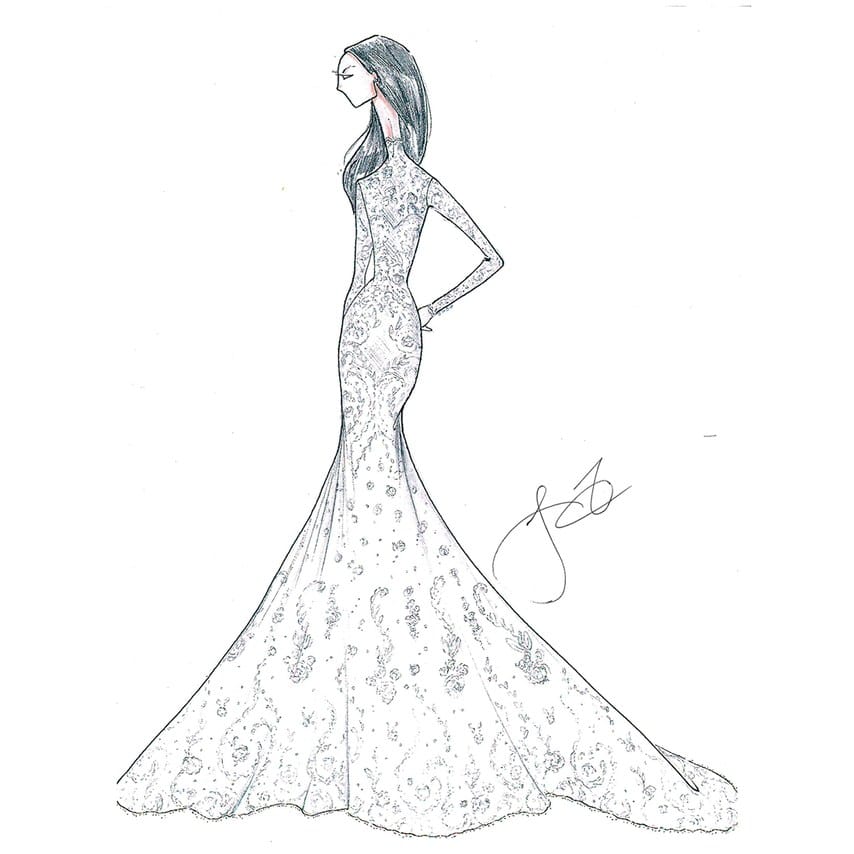 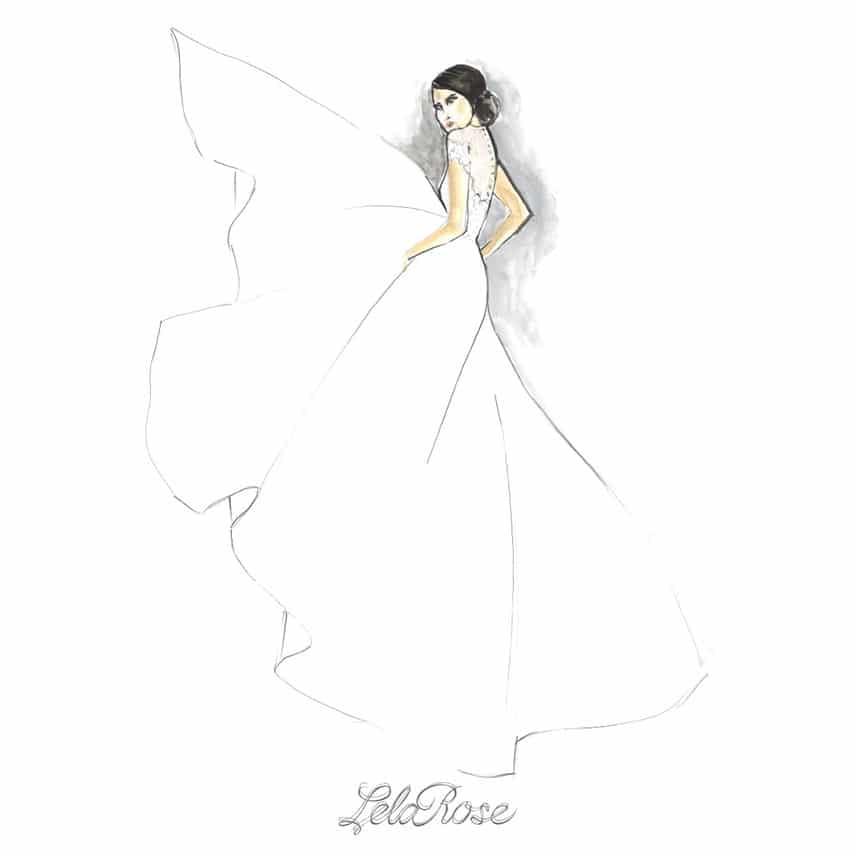 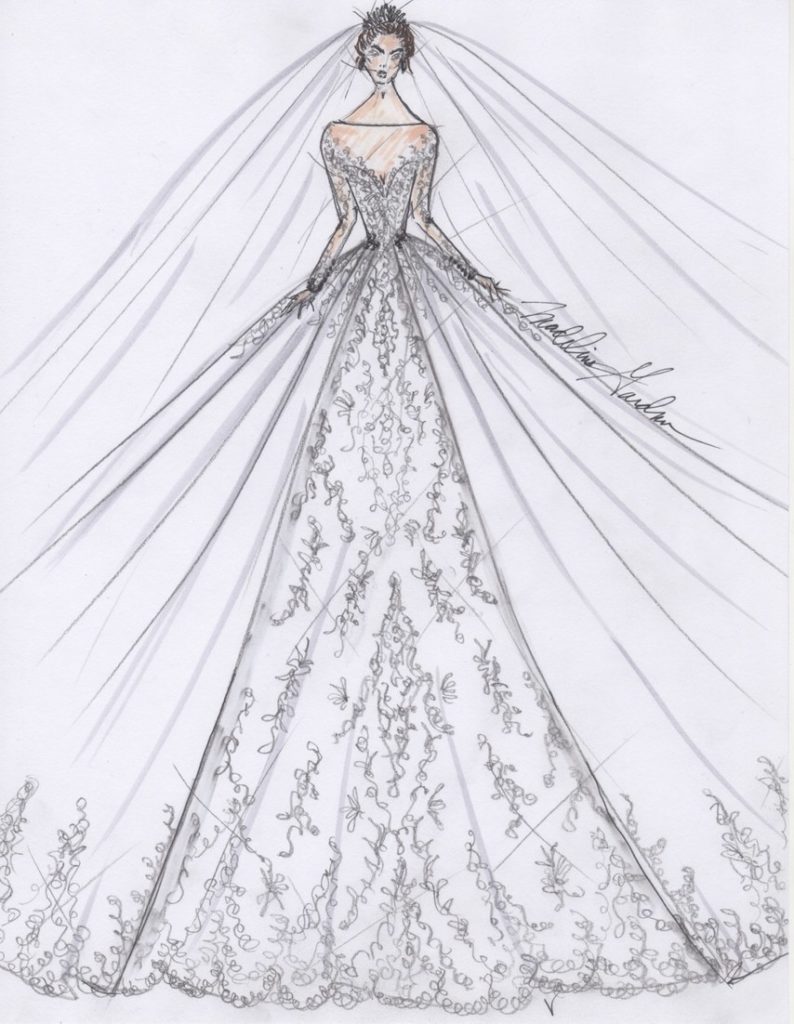 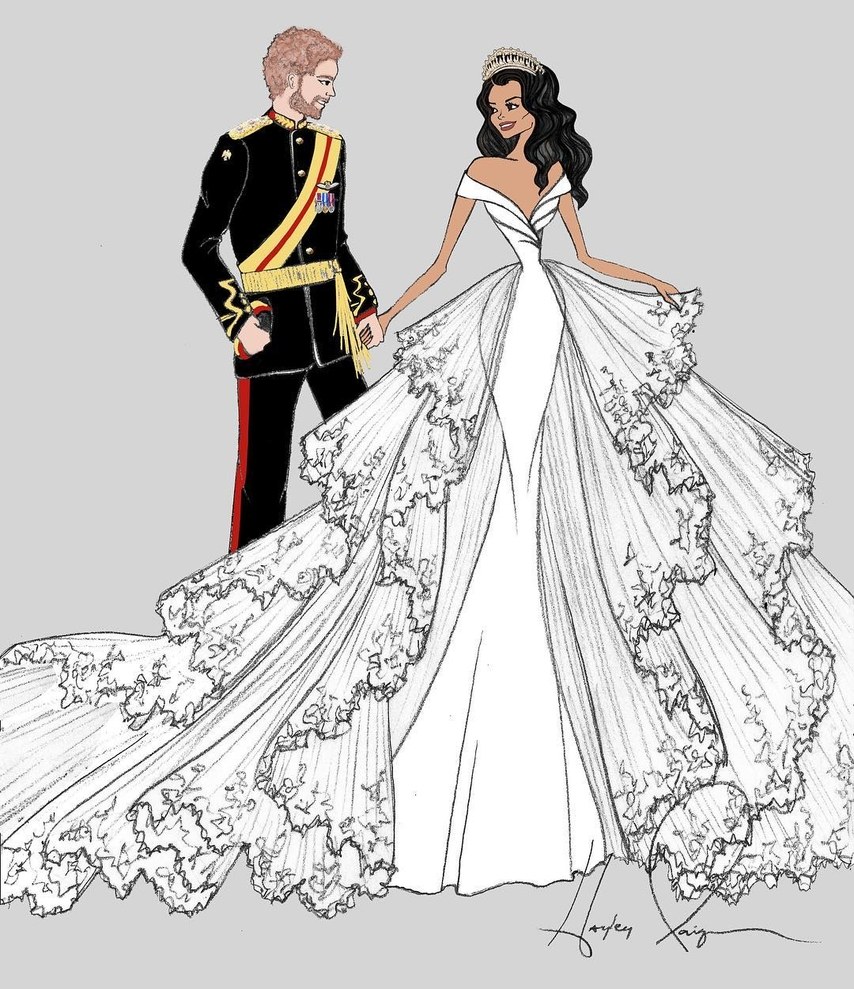 While all are uniquely beautiful, we think Meghan’s dress will be more conservative, covering her shoulders and décolletage with a soft A-line silhouette and intricate details.

It has been confirmed that Meghan Markle has chosen celebrity hairstylist Miguel Perez, who has an A-list clientele list including Amal Clooney. According to royal protocol, Meghan is not permitted to wear a tiara until after she’s married. However, it has been hinted that she will wear one on her wedding day. We personally are hoping she chooses the dramatic Cambridge Lover’s Knot Tiara (pictured below), the Strathmore Rose Tiara (pictured second) for a nod to gorgeous Gatsby 1920s style, or the Lotus Flower Tiara which was gifted to the Queen Mother. 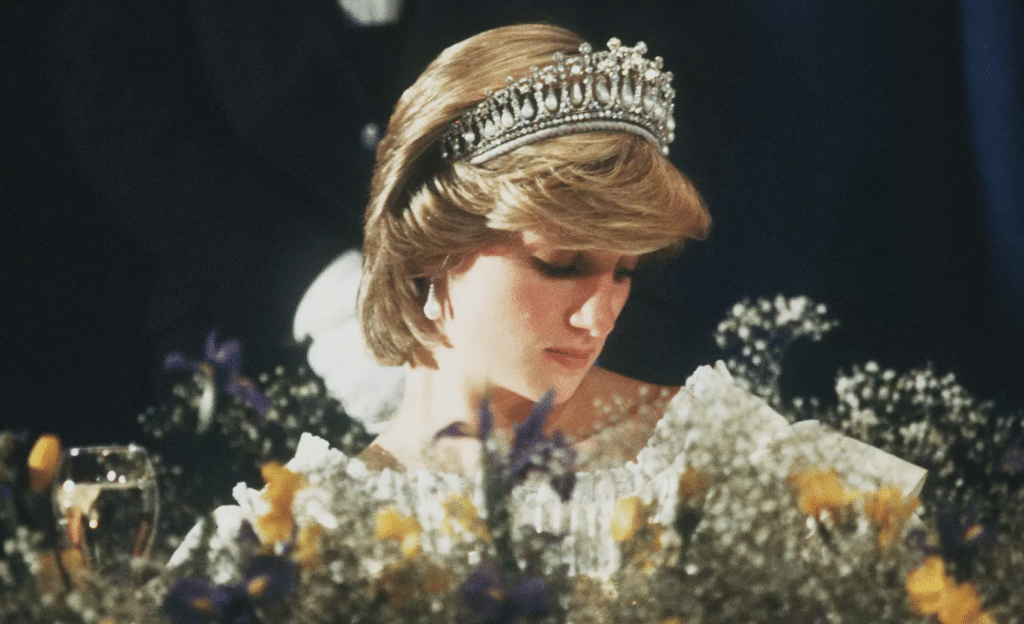 Prince Harry will be joined at the aisle by his brother and best man, Prince William. Markle recently revealed she will not be having a maid of honour- she couldn’t choose between several very close friends! Her bridesmaids are set to be young children under 17 years of age, as per royal tradition

The coveted invitations designed by Barnard and Westwood were sent out on March 22, and featured ivory card stock, elegant black script and Prince of Wales’ three-feathered badge in gold ink. With Meghan’s Hollywood acting career and Harry’s posh list of close friends, there is no doubt that the wedding will be attended by some of the most famous and royal faces in the world. Priyanka Chopra, the Spice Girls, Earl Spencer, Lady Jane Fellowes and Lady Sarah McCorquodale and their families are all slated to be in attendance. Former USA president Barack Obama and Michelle are allegedly not attending.
Kensington palace confirmed that the newest royal family member, Prince Louis Arthur Charles will not be attending the wedding of his uncle, and now, it appears that one of the eldest members of the family, Prince Philip (who turned 96 this past year) may also miss the event. He underwent hip replacement surgery early April and is still recovering. 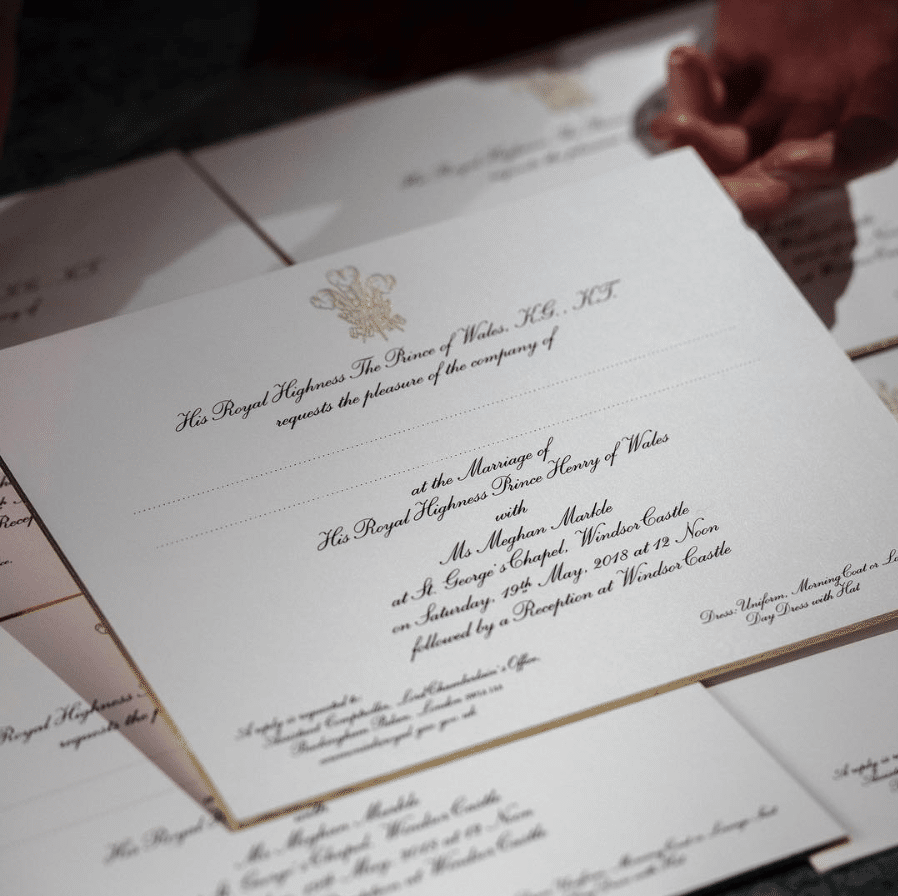 Where You Can Watch

The Fairmont Palliser Royal Wedding Brunch, May 19 2018, 10:30 AM
If you’re wanting to watch the Royal Wedding in true royal style, attending the Palliser’s Royal Wedding Brunch at 10:30 am will not disappoint. Featuring a plated 3 course menu and curated dessert buffet with pastry assortment and chocolate fountain, you’ll feel like a truly British wedding guest.
Tickets available here.

Royal Wedding Afternoon Tea. Rimrock Dining Room at the Fairmont Palliser, May 1- August 15, 2018
Unavailable on the wedding day? Tuck into ‘Early Grey macarons, cucumber tea sandwiches and of course, scones with clotted cream and house-made preserves’ for the Royal Wedding Afternoon Tea running until August 15. The highlight of the menu will undoubtably be the lemon cake with elderflower—created and inspired by the couple’s actual wedding cake and topped with edible gold. More information here.

Calgary’s Exclusive Royal Wedding Watch Party, May 19 2018, 9:30 AM, at Royale Restaurant
Sponsored by Neals Yard, Tickets available here. Watch the Royal Wedding in style at one of Calgary’s chicest French restaurants. ‘Sip on delicious beverages and munch on traditional British fare while toasting to the newly weds’. Included is a silent auction featuring local and British businesses with proceeds going to The Duke of Edinburgh’s Awards. Be sure to grab your ‘Oscar-style’ gift bags to take home!

If you wish to stream it live in the comfort of your home, here are a list of broadcasters that will be making the festivities available on television. 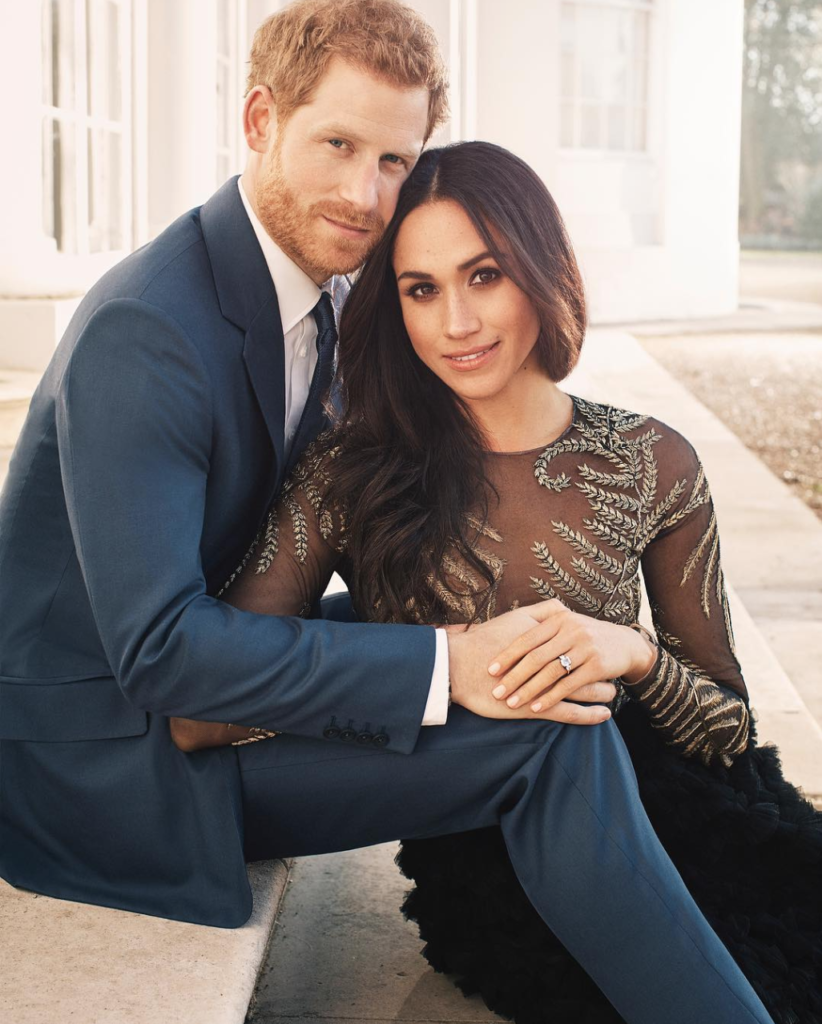 We are wishing the future Duchess of Sussex and her husband the most incredible wedding day. We simply cannot wait!

In 2 weeks, we say good luck and farewell to this

Top 3 mistakes to avoid when planning a winter wed

What’s the scariest thing that’s happened on a

“I was what most people would call a rather “p

We will *always* love picking out dreamy colour pa

Happy Thanksgiving 🍂🤍 From my little family

Design Tip 💁🏼‍♀️ If your space has a l

When time stands still for just a moment and takes

The day Huxley’s mom and dad got married 🤍 De